It's fucking MARCH MADNESS for Heroes of Newerth. It's UNBELIEVABLE BABY!

With the regular season of HoN Tour finally over we're moving into the HT Finals Playoffs to determine who is gonna move on to the big show and which teams are gonna be stuck sitting at home waiting for Season 2 details to be announced. So let's go over the teams and brackets: 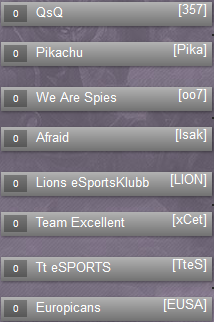 QsQ (now without a clan name at all) comes in at the 1st seed having met with some success earlier in the tournament then fizzling out in the middle. QsQ also had the most shocking results of any Diamond Division team as they were knocked back to Gold in Cycle 7 and even found themselves in a rough patch there as they were knocked into the Losers Bracket in the 3rd round by Bloodbath N Beyond (+1 for creative name/pun). Still QsQ has a good team with solid players on it. My issue with Nova's drafting is not that he drafts poorly, it's that he lets other teams draft extremely powerfully. I don't think he takes enough preventative measures against other top teams to make sure they aren't getting "God Comps". I also think QsQ struggles with good decisions on where to lane their heroes as well as putting the free farm onto the wrong heroes. NoX misses a lot more last hits than he should when given the safe lane free farm. The strongest skill QsQ has is their unpredictability in hero drafting, where they have many times made the best out of underplayed heroes (Voodoo Jester, Bombardier, etc)

Pikachu has a very under the radar season ans only comes into this tournament due to Absolute Legends dropping out. Pika has been around in some form or another for over 2 years, first as a pub clan, then making their way into the competitive scene after picking up former Infused player Buch. Despite them hovering around in Gold for the majority of the first seasons of HoN Tour, Pika has some solid players who have been together for a long time, but not always on Pika. Recently I believe fUzi and Xibbe from OTP joined the squad. Rounding out the long timers Buch, OwnedMe, Nir, Bassets (?) and TPSPriceless. Though this team has met with only the most mediocre level of success their players are mostly mechanically solid. My concerns lie with the lack of time this team has played together, questionable drafting and sub-par individual performances.

The Match: QsQ should ban Chipper if they want to increase their chances of winning. Recent games show that Xibbe continues to be a real force when playing that hero specifically. Conversely, Pika should keep in mind that QsQ is one of a few teams who really favor melee carries still and watch out for The Dark Lady and Monkey King specifically. QsQ runs a similar strategy to Trademark, which focuses of farming up 4/5 players to around the 300+ gpm mark. Pika runs more jungling strats than QsQ does but QsQ runs Malle on Parasite pretty much anytime the hero is available.

Winner: My gut tells me that QsQ is gonna pull through, but this match could be very tough for them if they let Pika dictate the drafting phase. The key players in this matchup will be Jonassomfan, Style, Xibbe and Buch. I'm gonna go with an upset here and choose Pika over QsQ, but a 2-0 victory for QsQ wouldn't surprise me in the least.


We Are Spies vs Afraid

We Are Spies received a little bit of attention shortly before the GSL Qualifiers kicked off when Tralf began practicing/scrimming with the team. While they have never had any real amount of success in Diamond, they secured enough victories in Gold division to stay as part of the Top 11 teams. I don't really know TOO much about them aside from their records but I know that Cakes (from CM) plays for them. I was gonna do a bunch of research into this team, but the truth of the matter is they don't belong in this tournament, and only got here because winning Gold is worth way too much.

Afraid started off under a lot of people radar but quickly proved that they are a team to not be taken lightly. They've gone about halfway through Diamond division in Cycle's 6, 7 and 8 and are, in my respected opinion, one of the favorites of this tournament. During this last cycle they even took down Stay Green in 2 games in the Winner Bracket, before being knocked down by Tt eSPORTS and then out by Absolute Legends. With aL out of the tournament before it begins and being on the opposite side of the brackets as TteS, this team stands a very good shot at making it into the Grand Finals. Afraid is captained by Jollem (formerly of FIT) who does the drafting for the team. He drafts pretty well for his team, but suffers from some of the same problems QsQ does, which is by not taking enough preventative measures in allowing their opponents to pick up strong lineups. Additionally, Afraid recently added MrLing to their roster, which as a last minute addition could lend to some instability for the team.

The Match: If We Are Spies wants to have any shot at all in this match they are going to need to pray that Afraid makes some serious drafting mistakes and then makes some serious in game mistakes. Afraid favors heroes like Artillery, Aluna, Rally and Master of Arms (in both the Carry and Support role) so expect to see some combination of those. Afraid doesn't always just out to the best starts, so if oo7 can come through in the laning phase they might be able to ride into mid game and sneak away a victory with the proper heroes.

Winner: Afraid should dominate We Are Spies in 2 games.

LIONS has been a tough team to beat all season and their most recent performance in the Sound Blaster Heroes League showed that they are a strong contender for the #4 spot in the overall rankings for competitive HoN.