So apparently, Trademark eSports is officially done with Heroes of Newerth. Tonight in Tralf's TwitchTV stream chat the following was posted: 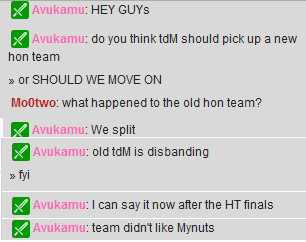 According to the Team Manager of Trademark eSports, not only was the split between tdM and their HoN squad "mutual" but the organization itself will disband. Avukamu went on to say that CEO of Trademark eSports, John Jenkinson, has decided to call it quits. Avukamu and noted Trademark eSports writer "Showtime" will continue on with the goals set down by Mr Jenkinson originally but this time with "better management."

Avukamu also made the statement that he believe that noobG and possibly Limmp will continue to play HoN, while Fittske and Zai` may test their mettle in DOTA 2. He speculates that Mynuts will simply retire.

With the future of Heroes of Newerth competitive scene still somewhat cloudy after the HoN Tour Finals, and a massive balance patch on the way, what kind of shake ups will we see?
Posted by hongossip at 2:14 AM