As most people know, Pew is about half a chromosome short of actually being a human being. But while this turd is often a waste of internet and oxygen, occasionally he posts something of value.

You can head on over to Pew's blog to get all the info:

I didn't post the image here because Pew discovered it and he deserves to get a few blog hits, since I already get about 5000x as many. 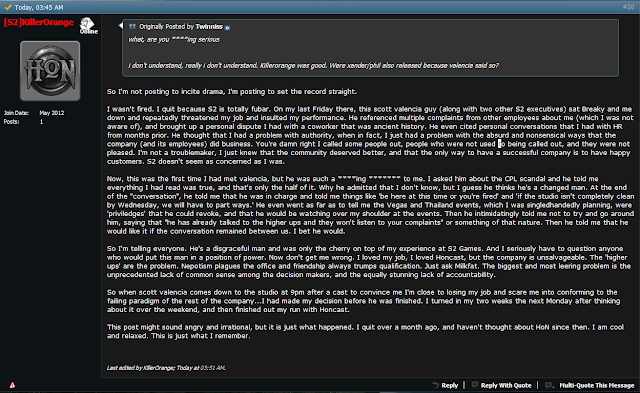 I really respect KillerOrange. Always have and always will. When we worked together, there were times when we didn't agree with each other, but we always aired things out and made sure we tried to do what is best for the community. He deserves all the credit for what Honcast became during HoN Tour, and the lack of his presence in Thailand and in Vegas was not only miss, but VERY VERY noted. We spoke briefly after he put his two weeks notice in and I pasted him part of the XanderK article I didn't publish, which resonates in the post he removed from the forums. I don't know exactly what Matt will do in the future but I hope I run into him again at some point so we can play some Euchre and drink a few beers and laugh at everything that happened while we were S2 employees.

Here is the excerpt from the XanderK article I never published:

"S2 Games is an indie company, as much as they want to believe differently. They have three games under their belt, two of which were relatively unknown and Heroes of Newerth. There's nothing wrong with being an indie company, some of the most loved games have come from or were inspired by concepts that were initially from indie companies. The negative stigma however, is that indie companies are "supposed to make mistakes, because they are just indie companies." This is the stigma which S2 has tried to distance itself from moving into the future. Needless to say, nepotism runs rampant in many indie companies, and S2 is no different. While some of these hires have paid nearly literal dividends, others have either continued to be illogically coddled at the breast of S2 Games executive members or dismissed due to consistent failure to achieve results which were either unobtainable or undefined."